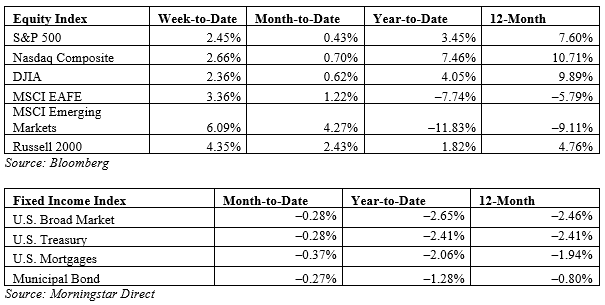 This will be a relatively slow week for economic news.

On Monday, the ISM Nonmanufacturing index pulled back slightly to 60.3, as expected. This result comes after a surprise increase in September to 61.6, a 21-year high. This is a diffusion index, where values greater than 50 indicate expansion. So, even with the small decline, this result remains quite strong. The pullback is due to slowing growth in the service sector. Overall, this result remains a positive indicator for the health of the economy as a whole.

On Friday, the producer prices report will be released. The headline index, which includes energy and food, is expected to rise by 0.2 percent for October, the same as for September. There may be some upside risk here on energy prices and tariff-driven increases in other input prices—especially steel and electronics. The annual change is expected to increase slightly to 2.7 percent from 2.6 percent, indicating that longer-term inflation pressures remain elevated above the Fed’s target range. The core index, which excludes energy and food, is also expected to stay steady at 0.2 percent for October, the same as for September. The annual figure should remain steady at 2.5 percent.

Finally, the University of Michigan consumer sentiment survey will also be released on Friday. It is expected to show confidence pulling back slightly, from 98.6 for October to 97.9 for November. This result would still be high, historically, suggesting that consumers are not yet worried about the effects of a trade war, given the continued strong labor market. This sentiment should continue to support consumer spending and economic growth.