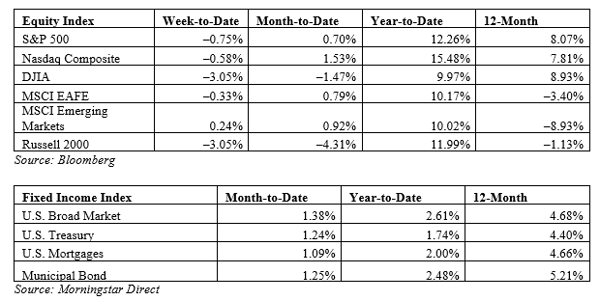 This week will be a busy one for economic news, including looks at housing, trade, confidence, and consumer income and spending.

The data flow starts on Tuesday, with the release of the housing starts report. Starts are expected to drop back slightly, from 1.23 million annualized in January to 1.21 million in February. This would still be a very good result, as the January number was a nine-month high. There is likely to be some downside risk, however, as single-family building permits dropped back last month, and multifamily starts are likely to remain steady. If the numbers come in even close to expectations, it would be a positive signal for the industry and economy.

Also on Tuesday, the Conference Board will release its consumer confidence survey. It is expected to tick up a bit, from 131.4 in February to 132 in March. This result would continue the index’s rebound after a recent decline, leaving it at a relatively high level historically. With gas prices and the stock market rising during the month, there may be some upside risk here.

On Wednesday, the international trade report will be released. It is expected to show an easing in the trade deficit, from $59.8 billion in December—which was a 10-year high—to $57.3 billion in January. The improvement should come from a rise in Chinese soybean purchases and a drop in imports, rather than a rise in exports. Overall, trade is likely to be a drag on growth in the first quarter if the numbers come in close to expectations.

Finally, on Friday, the personal income and spending report is expected to show renewed growth in income, up from a drop of 0.1 percent in January to a gain of 0.3 percent for February. Last month’s drop was technical rather than fundamental—a timing issue related to dividend payments—so continued growth would be a positive sign. Personal spending is expected to rebound even more, from a 0.5-percent drop in December to a 0.3-percent gain in January. The difference in timing between the reports here is due to the ongoing catch up from the government shutdown. Again, the rebound would be consistent with renewed confidence and would be a positive sign.