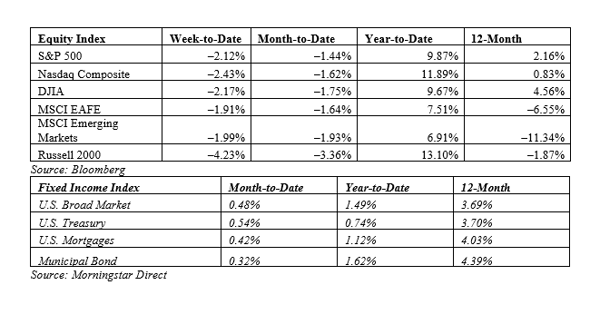 This week is a busy one for economic data.

On Monday, the retail sales report will be released. The headline index is expected to rebound from December’s surprising 1.2-percent drop to a flat result for January. The core index, which excludes autos, is expected to recover a bit more, from a 1.8-percent drop in December to a 0.4-percent gain in January. Much of the December decline was due to decreased income and confidence during the government shutdown, so the expected reversal would be reasonable. But even if the numbers come in as expected, they would indicate slower growth in the first quarter.

On Tuesday, the Consumer Price Index is expected to show a rise in the headline index, which includes energy and food, of 0.2 percent for February. This would be up from a flat result in January, leaving the annual rate at 1.6 percent. The core index, which excludes food and energy, is expected to hold steady at a 0.2-percent gain for February, the same as January. Here, the annual figure should stay steady at 2.2 percent. If the numbers come in as expected, inflation will remain solidly under control, which likely will keep the Federal Reserve patient on interest rates.

On Wednesday, the Producer Price Index is also expected to show moderate inflation. The headline index should rise from a 0.1-percent decline in January to a 0.2-percent increase in February. The annual rate, however, is expected to decline from 2 percent to 1.9 percent on base effects. Core prices are also expected to rise on a monthly basis, but by less, from an increase of 0.3 percent in January to a 0.2-percent gain in February. The annual figure is expected to stay steady at 2.6 percent.

On Friday, the industrial production report is expected to bounce off a very weak January. Growth declined by 0.6 percent in January, largely on reduced manufacturing output. It is expected to rise by 0.6 percent in February, however, on resumed growth and higher utility production due to the cold weather. Manufacturing is also expected to rebound, from a 0.9-percent decline in December to a 0.5-percent rise in January. There may be some downside risk to both of these numbers on slowing global demand.

Also on Friday, the initial release of the University of Michigan consumer confidence index is expected to rebound a bit, from 93.8 in February to 95.8 in March. The government shutdown was responsible for much of the recent decline, reportedly, so its end should help the index bounce back a bit. Lower gas prices and the stock market recovery are also expected to help.