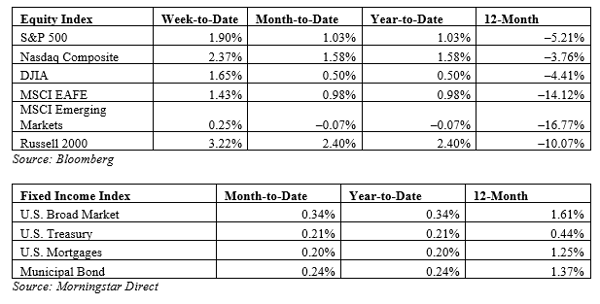 This week’s reports cover a wide range of economic activity.

On Monday, the ISM Nonmanufacturing index pulled back a bit further than expected, from 60.7 in November to 57.5 for December. This is a diffusion index, where values above 50 indicate expansion and below 50 indicate contraction. This result still leaves it close to the 21-year high from September and well in expansionary territory. The pullback came from slowing growth in the service sector. But even with the pullback, this index remains positive for the economy as a whole.

On Tuesday, the international trade report is expected to show the trade deficit improved slightly, from $55.5 billion to $54 billion. This expected moderation suggests that the damage to exports from the current trade conflict is not getting worse, which would be positive. Overall, however, if the numbers come in as expected, trade will likely continue to be a drag on fourth-quarter growth.

On Wednesday, the minutes from the December meeting of the Federal Reserve Open Market Committee will be released. After the rate increase and hawkish tone of the postmeeting press conference upset markets, analysts will be looking to see whether the actual discussions were more dovish. If so, in conjunction with Chair Powell’s remarks last Friday, markets could react positively.

On Friday, the consumer price reports are expected to show moderating inflation at the headline level. The headline index, which includes food and energy, is expected to decline slightly. It should go down by 0.1 percent for December, from flat for November, on a decrease in gasoline costs. The annual figure is expected to drop to 1.9 percent in December from 2.2 percent in November, which would be a 17-month low. The core index is expected to stay steady at a 0.2-percent increase for December, the same as November, while the annual figure should hold at 2.2 percent. These figures indicate core inflation continues to run somewhat above the Fed’s target levels, which should continue to support interest rate increases.

Disclosures: Certain sections of this commentary contain forward-looking statements that are based on our reasonable expectations, estimates, projections, and assumptions. Forward-looking statements are not guarantees of future performance and involve certain risks and uncertainties, which are difficult to predict. All indices are unmanaged and are not available for direct investment by the public. Past performance is not indicative of future results. The S&P 500 is based on the average performance of the 500 industrial stocks monitored by Standard & Poor’s. The Nasdaq Composite Index measures the performance of all issues listed in the Nasdaq Stock Market, except for rights, warrants, units, and convertible debentures. The Dow Jones Industrial Average is computed by summing the prices of the stocks of 30 large companies and then dividing that total by an adjusted value, one which has been adjusted over the years to account for the effects of stock splits on the prices of the 30 companies. Dividends are reinvested to reflect the actual performance of the underlying securities. The MSCI EAFE Index is a float-adjusted market capitalization index designed to measure developed market equity performance, excluding the U.S. and Canada. The MSCI Emerging Markets Index is a market capitalization-weighted index composed of companies representative of the market structure of 26 emerging market countries in Europe, Latin America, and the Pacific Basin. The Russell 2000® Index measures the performance of the 2,000 smallest companies in the Russell 3000® Index. The Bloomberg Barclays U.S. Aggregate Bond Index is an unmanaged market value-weighted performance benchmark for investment-grade fixed-rate debt issues, including government, corporate, asset-backed, and mortgage-backed securities with maturities of at least one year. The U.S. Treasury Index is based on the auctions of U.S. Treasury bills, or on the U.S. Treasury’s daily yield curve. The Bloomberg Barclays U.S. Mortgage Backed Securities (MBS) Index is an unmanaged market value-weighted index of 15- and 30-year fixed-rate securities backed by mortgage pools of the Government National Mortgage Association (GNMA), Federal National Mortgage Association (Fannie Mae), and the Federal Home Loan Mortgage Corporation (FHLMC), and balloon mortgages with fixed-rate coupons. The Bloomberg Barclays U.S. Municipal Index includes investment-grade, tax-exempt, and fixed-rate bonds with long-term maturities (greater than 2 years) selected from issues larger than $50 million.