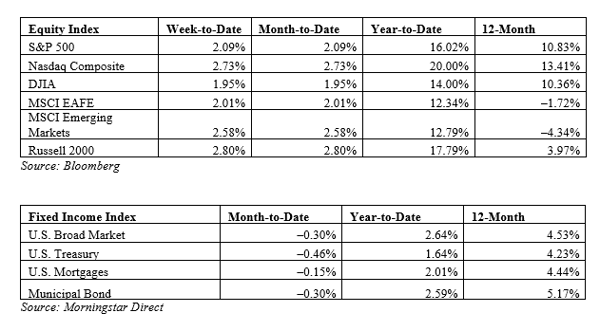 What to Look Forward to

This week is a busy one for economic news. On Wednesday, the consumer prices report is due. The headline index, which includes energy and food, is expected to rise from a 0.2-percent increase in February to a 0.3-percent increase for March on a rebound in energy prices. This will take the annual rate from 1.5 percent to 1.8 percent, which is still well below the Fed’s inflation target. This increase will be entirely due to gasoline prices. The core index, which excludes energy and food and is a better economic indicator, is expected to be lower. It should edge up from 0.1 percent in February to 0.2 percent in March but remain steady at 2.1 percent on an annual basis. Overall, if the numbers come in as expected, they would show that inflation remains under control.

On Wednesday, the minutes from the Fed’s March meeting will be released, giving us some insight into the Fed’s decision to leave rates unchanged last month. Expectations are that the notes will show that Fed members are unlikely to raise rates this year but could include more color on how they plan to stop reducing the Fed balance sheet. These notes are unlikely to move markets. But in conjunction with the price data, they could serve to reinforce market expectations of a steady rate policy.

Finally, the University of Michigan consumer confidence survey, released on Friday, is expected to drop slightly from 98.4 in March to 98 in April. Although gas prices have risen, the stock market has done well and job growth has rebounded, which should leave confidence steady. If the number comes in as expected, this would be well above the historical average and serve as a counterweight to the weaker results from the Conference Board surveys.