My colleague Sam Millette, senior investment research analyst on Commonwealth’s Investment Management and Research team, has helped me put together this month’s Economic Risk Factor Update. Thanks for the assist, Sam!

The economic recovery continued to accelerate in June, driven by improvements on the public health front and ongoing reopening efforts that left almost all of the country open by the end of the month. The June employment report showed that the pace of hiring picked up, as headline job growth came in above economist estimates. Consumer confidence rose notably in June and now sits near pre-pandemic levels. Business confidence saw a slight pullback but remains above pre-pandemic levels, signaling continued growth ahead.

Despite the very real progress during the month, not all the news was good. On the medical side, case growth stopped declining at the end of the month, suggesting further improvements might be at risk. On the economic side, supply chain issues remain an unresolved question, and employment is well below pre-pandemic levels. Overall, we’ve kept the economic risk level at yellow for now, but an upgrade to green remains possible in the upcoming months if those problems resolve. Although we have made progress in terms of containing the pandemic and bringing the economy back, we are not there yet, and the uncertain path to normal indicates that economic risks remain. 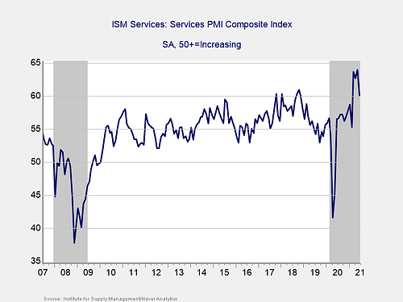 Service sector confidence declined by more than expected in June, with the index falling from 64 in May to 60.1 in June against forecasts for a more modest decline to 63.5. This pullback from May’s record level still represents healthy service sector confidence, well above what we have seen throughout almost all of the past decade. This is a diffusion index, where values above 50 indicate expansion, so the report showed that the service sector continued to grow at a strong pace.

Given the fact that service sector confidence has remained above pre-pandemic levels for the past four months, we have left this signal at a green light for now, despite the index’s decline in June. 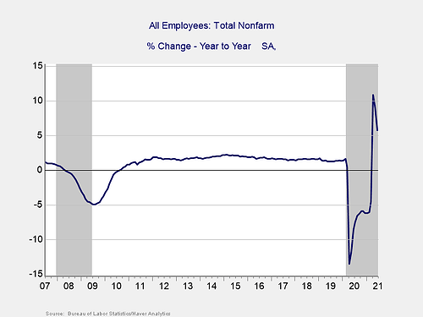 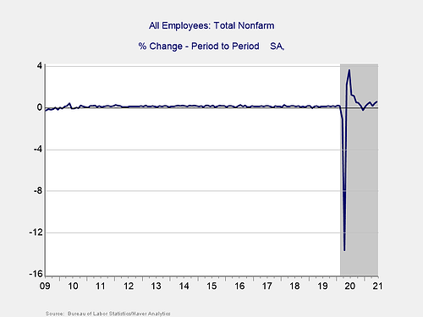 June’s employment report showed that the economy added 850,000 jobs during the month, an increase from the upwardly revised 583,000 jobs that were added in May and above economist estimates for 720,000 additional jobs. This result now marks six straight months with job growth following a temporary lull in hiring last December. The hard-hit leisure and hospitality sector saw some of the largest gains during the month due to the continued easing of state and local restrictions that allowed more businesses to reopen.

Although June saw year-over-year employment increase by 5.8 percent, this was primarily due to the large decline in jobs that we saw last spring and summer when initial lockdowns were implemented. The total number of jobs across the economy remains down by more than 6.7 million compared with pre-pandemic peak levels.

While the continued job growth during the month was a positive development, it would take eight months of hiring at a similar rate to get back to pre-pandemic employment levels. Given the still large decline in overall employment compared with the pre-pandemic peak, we have left this indicator at a yellow light for now, with an upgrade to green possible in the months ahead if we continue to see accelerated job growth. 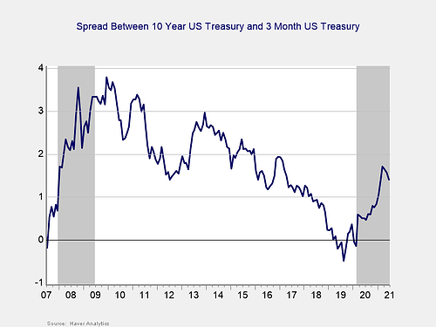 Given the fact that long-term yields remain above the 2020 lows, we have kept this signal at green light for now. But if long-term rates continue to decline, we may see further yield curve flattening and a potential downgrade to yellow. 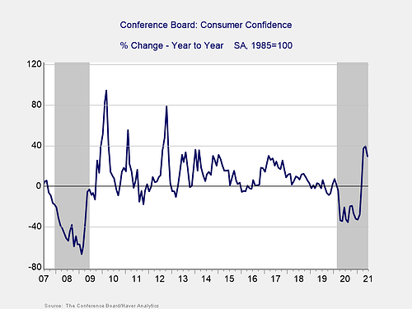 Consumer confidence increased by more than expected in June. The Conference Board Consumer Confidence Index rose from an upwardly revised 120 in May to 127.3 in June against calls for a modest decline to 119. This better-than-expected result brought the index to its highest level in 16 months and signals that consumer sentiment improved notably. Confidence has been supported by improvements in public health, additional rounds of federal stimulus payments, and accelerating job growth.

Given the fact that confidence has now returned to pre-pandemic levels and remains strong on a year-over-year basis, we have left this indicator at a green light for now. Looking forward, continued job growth and progress on the mass vaccination front should help to support high levels of consumer confidence and spending growth as we head into the summer months.

The economic data releases from June largely pointed toward accelerated growth in the months ahead. The improvements for consumer confidence and job growth were encouraging signs that the economic recovery continued to pick up steam in June, driven by improvements on the public health front and the nationwide reopening efforts.

While continued growth remains the most likely path forward, it’s too early to say that we are back to normal. The high levels of business and consumer confidence should continue to support additional spending growth; however, risks remain, which could cause uncertainty over the path and pace of the expected recovery. We’ve seen uncertainty rise in July, as markets have experienced some volatility driven by growing concerns about the Delta variant.

Given this uncertainty and the continued stress on the labor market, risks to the economic recovery remain, even if continued growth is the most likely path forward. The continued recovery in June was encouraging, and we have left three of the four indicators at a green light for now, with a future upgrade to the labor market possible if we continue to see accelerated job growth. We have left the overall economic risk indicator at a yellow light for now, with the prospect for an upgrade in the upcoming months if we see further improvements.

Disclosure: Certain sections of this commentary contain forward-looking statements based on our reasonable expectations, estimates, projections, and assumptions. Forward-looking statements are not guarantees of future performance and involve certain risks and uncertainties, which are difficult to predict. Past performance is not indicative of future results. Diversification does not assure a profit or protect against loss in declining markets. All indices are unmanaged and investors cannot invest directly into an index. The Dow Jones Industrial Average is a price-weighted average of 30 actively traded blue-chip stocks. The S&P 500 Index is a broad-based measurement of changes in stock market conditions based on the average performance of 500 widely held common stocks. The Nasdaq Composite Index measures the performance of all issues listed in the Nasdaq Stock Market, except for rights, warrants, units, and convertible debentures. The MSCI EAFE Index is a float-adjusted market capitalization index designed to measure developed market equity performance, excluding the U.S. and Canada. The MSCI Emerging Markets Index is a market capitalization-weighted index composed of companies representative of the market structure of 26 emerging market countries in Europe, Latin America, and the Pacific Basin. It excludes closed markets and those shares in otherwise free markets that are not purchasable by foreigners. The Bloomberg Barclays Aggregate Bond Index is an unmanaged market value-weighted index representing securities that are SEC-registered, taxable, and dollar-denominated. It covers the U.S. investment-grade fixed-rate bond market, with index components for a combination of the Bloomberg Barclays government and corporate securities, mortgage-backed pass-through securities, and asset-backed securities. The Bloomberg Barclays U.S. Corporate High Yield Index covers the USD-denominated, non-investment-grade, fixed-rate, taxable corporate bond market. Securities are classified as high-yield if the middle rating of Moody’s, Fitch, and S&P is Ba1/BB+/BB+ or below.